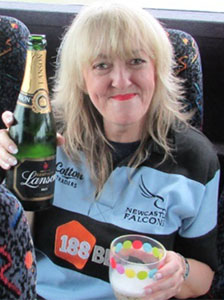 I have been a season ticket holder at Kingston Park since the 2004, having attended a handful of games the previous season. Over the years not only have I attended home games but I have also been lucky enough to attend many away games, usually on the Supporters Club coach. Wherever possible I try to support our team home and away, including traveling to games in Europe.  This has taken me to destinations that I would NEVER have dreamt I would ever have visited. Some of those destinations have included L’aquila and Padova in Italy, Brive, Lyon and Toulon in France and Bucharest, Romania.  Newcastle Falcons has enabled me to meet some amazing people and make some lifelong friends. I have been on the Committee of the Supporters Club for the past year and my roles include those of Secretary and Membership Coordinator.